Dumb Ways to Die Wiki
Register
Don't have an account?
Sign In
Advertisement
in: Includes Infobox, Article stubs, All Pages,
and 10 more

Boffo is a bit of a free spirit. He went on a spiritual journey to find himself, but never did find anything. One day he wandered onto a sporting field by accident and ended up staying because he thought it had “good vibes”. Sadly Boffo didn’t know that you’re meant to throw javelins, not catch them. He now volunteers as a coat rack.

He is a dark sea green character with wenge-colored dreadlocks, gathered in a carrot orange and white sweatband.

According to his bio, Boffo is a free spirit, with a somewhat sadistic side.

As a side note, Dumb Ways JR portrays Boffo as being enthusiastic (shown in almost every Dumb Ways JR app), much similar to Loopy.

He's also once been described to give Metro a 70's hippy vibe.

Boffo can be seen raising the USA flag after the sculpture of him, Zany, Madcap, and Stupa raised up.

Boffo can be seen in Happy Fourth of July, albeit a sculpture with Zany, Madcap and Stupa, based on Mount Rushmore.

I caught it… with my face

Boffo swimming in the "swim between the flags" level 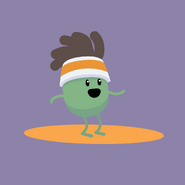 Young Boffo Along with Madcap, Dumbbell and a Penguin (as Seen in Dumb Ways Jr.)

Boffo in the app "Boffo's Breakfast"

Boffo and Stupa astonished after being teleported in the restroom

Boffo and Stupa are mashed-up

Dumbbell tries to remove the aliens from Boffo's tummy 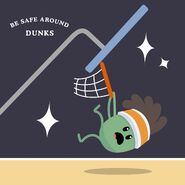 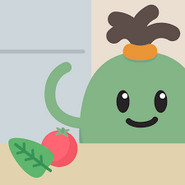 A giant monster bursting out of Boffo's chest.

This article is a stub. You can help Dumb Ways to Die Wiki by expanding it.