Dumb Ways to Die Wiki
Register
Don't have an account?
Sign In
Advertisement
in: All Pages, Websites, Games, 2D

Dumb Ways to Kill Oceans is the World Oceans Day campaign and the website officially associated with Dumb Ways to Die. The site is empowered by Playmob. 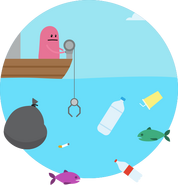 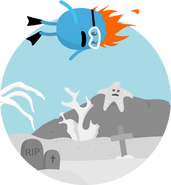 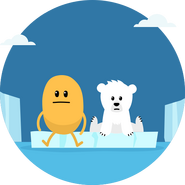 Dumb Ways to Kill Oceans is a small but mighty mini-game highlighting some of the biggest challenges faced by our oceans. Get inspired by Hapless, Numpty & Dippy and make small changes to your own lives that can help make our oceans and our planet a healthier one for everyone.

— "Try the game" section in the site

The game features 3 minigames to play and each minigame has to be cleared before the 20 seconds timer goes out.

Tap To Remove The Plastics[]

This minigame features Dippy where the player has to tap the plastics to reel them up.

In the success of the minigame, Dippy high fives with a turtle in water.

In the failure of the minigame, a garbage truck suddenly appears and dumps more plastics toward the boat that Dippy is riding on, resulting in him to get thrown into the water and causes his lower body to get eaten by two piranhas like the original music video.

Tap To Make The Word[]

This minigame features Hapless along with a polar bear cub, where the player has to tap split characters to make the word.

Once the correct word "MELT" is made, both characters cheer with ice cream cones.

Once the time is out before making the word, an unsuspecting ice shard flies from left; as soon as it cuts Hapless' body into half and he then drown in cold water, causing his bodies to get frozen slowly.

Tap To Colour The Reef[]

This minigame features Numpty where the player has to tap the areas to color them.

Once all the areas were colored, he will be happily swimming in underwater across the alive, varying ocean lifeforms.

Once the time runs out before coloring them all, he will still be swimming in underwater like the winning scene, except that his head is burning in water and he swims unpleasantly across the grayed, dead ocean lifeforms.

If selecting the "I don't care about the oceans!" button at the start

The loss scene of the minigame Tap To Remove The Plastics

The loss scene of the minigame Tap To Make The Word

The loss scene of the minigame Tap To Colour The Reef