Dumb Ways to Die Wiki
Register
Don't have an account?
Sign In
Advertisement
in: Includes Infobox, Includes Non-canonical Information, All Pages,
and 12 more

Dumbbell is a character that was introduced in the application Dumb Ways to Die 2: The Games.

He is a stout, turquoise character with a teardrop cowlick hairstyle.

Despite being unknown what Dumbbell's personality is, it can be assumed that he is an everhunger, as seen in two Dumb Ways to die 2 minigames: in one he had to eat tons of meat (Beast Feast in The Dumbgeon), and in another he tried to lick an icy pole (Don't Lick the Pole in Freezerville). Also, during his check-up in the Dumb Ways JR app Zany's Hospital, one of his animations has Dumbbell pretending to chew something.

He appears in the minigames Dumb Life Saving, Three Tonne Clean and Jerk, Don't Lick The Pole, Shark Jumping and Stay Off The Tracks. 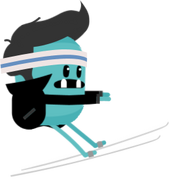 Dumbbell as a swimmer. 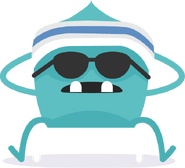 Seen in Running Beside the Pool mini-game.

Playing on his phone. 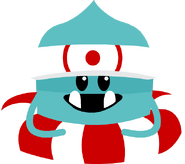 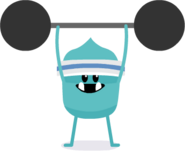 "Mmm… Icy pole. Uh-oh!" as a default tweet message for sharing this death

He is seen after the success of the minigame Shark Jumping.

Dumbbell sitting on a bench 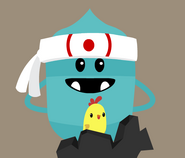 Dumbbell succeed to break an anvil.

Dumbbell failed to break an anvil, and "Anvils. Pretty hard." as a default tweet message for sharing this death

In the losing scene of Beast Feasting

Dumbbell when the love tester on dumbwaystovalentine.com is true.

A mini-minigame on dumbwaystovalentine.com which shows if character 1 loves character 2 or not. 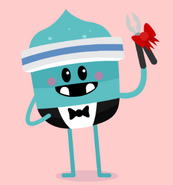