Knucklehead is a soft green oval-shaped bean and has a dull brown pompadour. Similarly to Mishap, his latest appearance gives him a bright green color scheme.

His officer outfit consists of a dark blue hat with a yellow badge, and a belt with a keychain, which has a yellow and a grey key.

As a guard, Knucklehead only wears a blue hat with a grey "M" on it, which either stands for Metro or Melbourne.

Knucklehead is seen waiting at a pedestrian crossing. The player has to tap ten times to help him wait. If they are successful, he will wait for a train to drive by, safely crossing with a relieved look on his face. Otherwise, he will force the gate open, and get ran over.

In the success scenes of two of these games, Knucklehead will prepare to arrest Dimwit and Dippy for accidentally touching stuff at the museum. In the other ACMI game, Knucklehead (in his guard outfit) will call Dimwit and embarrass him.

He only appears in the success scene of Deck Disaster, where he will tell Crash off for skating on a platform.

Knucklehead seen in the minigame where he made his debut. 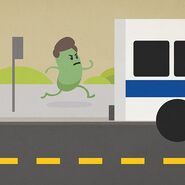 Knucklehead running after a bus.

Him from Alien Invasion sticker set.
Community content is available under CC-BY-SA unless otherwise noted.