Dumb Ways to Die Wiki
Register
Don't have an account?
Sign In
Advertisement
in: Includes Infobox, Characters, All Pages,
and 15 more

Ninny is a bean who gets blown up after pressing the red button.

Ninny loves everything red. Red lights, red flags, red buttons. Always the joker, if Ninny grew up in the Middle Ages he would have been the fool. We know this because even the giant 'world destruction' sign didn't stop Ninny from pressing the red button. Now, no more Ninny.

Ninny is a long amber peanut-bodied bean, he is sometimes seen with a chin and a pair of eyebrows.

Similar to Lax's appearance, Ninny sometimes appears with a thicker peanut body, with a more slightly yellowish undertone, visible upper jaw teeth, and small tufts of hair on his head.

Ninny is seen standing by a red button, saying, "I wonder what's this red button do?" before pushing it. A nuclear explosion then kills him off-screen.

Ninny is unseen in his first minigame, in which the game tells the player not to push the red button. If they do not, a rainbow appears, but otherwise a nuclear explosion happens.

Ninny also has a new game in the update where the player must remember a series of buttons to push. If they push the buttons in the correct order, fireworks will appear. If they do it incorrectly, the nuclear explosion happens again.

Can't be unlocked at this point of time

Ninny has a Halloween-themed game that's similar to Button Blast, but in this game, he has to put potions in the correct order this time instead. If this is done successfully, Ninny will turn into a werewolf. Otherwise, he gets blown up again. 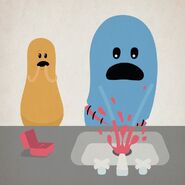 Ninny on Valentine's Day with Dunce. 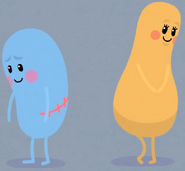 When you see a lion, you should never, ever, EVER... 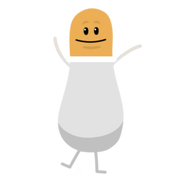 In-game image used in DWtD3, which he wears spacesuit.

Him with his alt appearance getting his eye ripped out

He appears in Hot Date with Dunce
Community content is available under CC-BY-SA unless otherwise noted.
Advertisement